Description:   Join us for unique event, where we have the opportunity to hear first hand about the ins and outs of the court system from a panel of Iowa judges; in addition, the judges will be addressing some questions sent in by our members.

If you have a question you would like to pose, please email Anthony Lamb at lamb@klasslaw.com  no later than 10/31/19, some limitation on responses will be expected.

Judge Andreasen was appointed as a district judge in January 2008. He had served as a magistrate in Woodbury County in 2006 and 2007 before his appointment to the bench. He received his undergraduate degree from the University of Iowa in 1989 and his law degree from the same institution in 1992. Judge Andreasen was in private practice in Sioux City since 1992. He is a member of the Iowa State and Woodbury County Bar Associations and the Iowa Judges Association. He is married with one child. 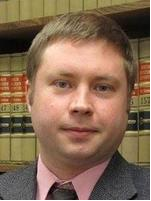 Began service as a Woodbury County Magistrate on November 3, 2014.  He was appointed District Court Judge in 2017.  He was born and raised in Sioux City, Iowa. He attended West High School in Sioux City and graduated magna cum laude from Morningside College in Sioux City in 2013 with a B.A. in American History. He attended Brandeis School of Law at the University of Louisville and graduated with a degree of Juris Doctor in 2006. Magistrate Deck became a member of the Iowa State Bar Association in 2006 and is a partner at Deck law, LLP. He was admitted to the United States District Court for the Northern District of Iowa in 2007 and the United States Court of Appeals for the Eighth Circuit in 2009.